The most important heavy metal band to emerge from Israel.  Why, you may ask?  Well, not only did Stella Maris become the first Israeli band to be featured on MTV, but they also had the honor to have the legendary Chris Tsangarides (Judas Priest, Thin Lizzy, Black Sabbath, Tygers of Pan Tang) produce their second record.  Despite their enormous local success, the band had an extremely difficult time breaking into the mainstream market, mainly as a result of their decision to sing all of their songs in Hebrew.  Nevertheless, this shouldn't stop you from giving Stella Maris a chance, as they are both culturally and musically significant to the rise of heavy metal in the Middle East.

Here is a short written account by producer Chris Tsangarides regarding his relationship with the band:
"I first met the band In 1993 And was suitably impressed to record their second album in Israel and London The songs were all sung in Hebrew which limited their appeal to the Israeli market Sales figures indicated 17,000 units in Israel serious amount for rock music. At the time of recording I thought that there was potential to translate these songs into English and thus have a very strong chance of success overseas. The problem was that the band's singer at that time had a very strong accent and it did not sound authentic when he sung in English therefore limiting the sales to the home market. I am pleased to say that the bands have a fantastic new singer who does sound authentic when he sings in English. I have written six new songs with them and believe that they are as good as any in this genre of music I love the musicality of this band and they have a great feeling for melody coupled with strong rhythms and grooves. In my book this is a sure sign of great songs. I am committed to making a great record with them.  I see this as a great opportunity for making a profound musical statement."  (Taken from TuneCore) 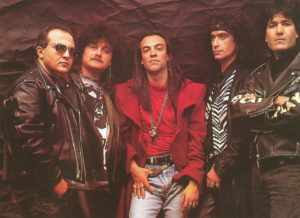