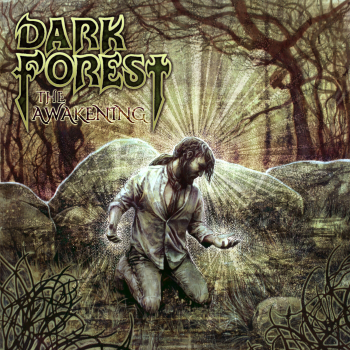 I discovered  Dark Forest through their current singer’s (Josh Winnard) previous band Wytch Hazel.  In it, he was the band’s lead guitarist, and, along with fellow singer/guitarist Colin Hendra, played a unique mesh of heavy metal and medieval music.  When I first heard that Winnard quit Wytch Hazel in order to focus on Dark Forest, I knew right away that I had to give them a listen.  Interestingly enough, this was right around the time when “The Awakening” was just about to get released, and so the band’s record label had already begun streaming a couple of the album’s tracks.  All I remember from that was the moment I clicked to listen to “Sons of England” and was instantly impressed.  The first few notes immediately put me in a musical trance like never before, and so, like any other die-hard heavy metal fan, I was convinced enough to purchase the album.  Was it a good investment you may ask?  Hell. Fucking. Yes.

The whole musical structure behind “The Awakening” is something to be astonished by; I mean the band is able to create melodies that fuse certain musical elements that we don’t often hear in today’s heavy metal scene.  Remnants of medieval and even celtic influences are often heard throughout many of the tracks and surely cement Dark Forest‘s unique and mature sound.  This is usually captured through Christian Horton (main songwriter) and Patrick Jenkins’ constant use of lead-oriented melodies that give each song their own magical touch.  Because of this, the album never drags on and never shows any sign of wearing out.  “Secret Commonwealth” is a perfect example to support these statements; there is always something going on, and it pays to take note of every little detail that makes up this fabulous track.  The killer “Sacred Signs” is another track that highlights the twin guitarists’ talent, whether it be the constant lead fillers or the harmonious solos that naturally arise through Winnard’s vocals.Speaking of Winnard’s vocals, it’s almost impossible not to imagine Dark Forest without him, seeing as though he is one of the band’s newest members, having joined in 2012.  His style of singing perfectly fits the music that accompanies him, so much so that the way he’s able to hit hauntingly high notes and screams.  Tracks that highlight this are the memorable “Panda’s Fen”, whose powerful chorus is a product of Winnard surpassing his vocal limits, as well as the mighty “The Last Season”, which completely hypnotizes listeners to chant “Long ago…” whenever possible.

“The Awakening” is surely a contender, in my eyes, for being my favourite album of 2014, and it’s really hard to deny it.  Grab a beer, sit down and listen attentively and you’ll know exactly what I mean…