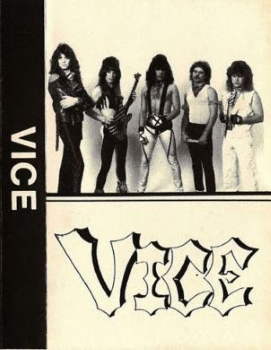 Superb neo-classical/traditional metal demo by Vice, a small band from L.A whose guitarist, Chris Impelliteri, would go on to form “Impelliteri” in 1987 alongside vocalist Rob Rock.  If any of you are familiar with Impelliteri, you would immediately notice his signature guitar sound that is heavily influenced by classical music.  This demo marks the debut of both Impelliteri and Rob Rock’s musical career, and what a start it is!