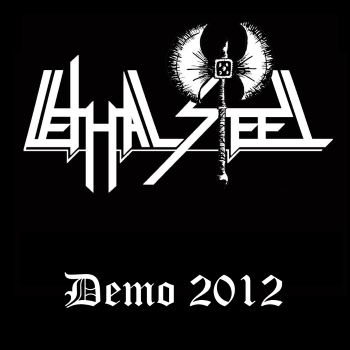 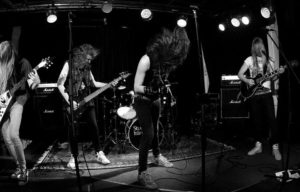 Hailing from the metal nation of Sweden, Lethal Steel‘s first attempt sure does shine a bright light for the future of the underground heavy metal community, as they have triumphantly expressed their love and dedication for this music through the songwriting process of this demo.  That very obscure feeling in the sounds produced by this band brings to mind some of Sweden’s most talented bands (Gotham City, Heavy Load, Jonah Quizz, Mindless Sinner to name a few), which has now manifested itself in Lethal Steel‘s overall song structure.  Sure enough, the vocals are mainly executed in a mixture of both Swedish and English, which again reinforces that very “cult” experience.  I myself tend to lean towards bands singing in their own native language, as it sort of makes the music and lyrics seem more genuine without having to stress about writing in English.

With this intact, the vocals carried out by Viktor fit the band very well indeed throughout his melodious performance, and although he is clearly not the greatest singer in the world in terms of vocal range, you can very much hear the effort and energy he is putting into every track. Speaking of the songs, each one possesses a very “Nordic” or rather “Viking” feel to them; it’s not exactly something I can describe, although it does remind me of another fairly recent Swedish band called Helvetets Port, mainly for their sheer worship of obscure 80s metal. The title track “Lethal Steel” is a purely straight-up and in-your-face metal number, where the vocals absolutely create the whole atmosphere of the overall experience, especially through the chorus, along with the constant progression of riffs, which brings about the band’s energetic and lively nature.  “Don’t Look Back” continues in the same vain, but mainly focuses on the guitars, as seen through the various solo lines, which seemingly makes this song a bit more technically diverse than the rest of the demo. “Retribution” begins and continues throughout the first half of the track with a somewhat slower progression to it. The second half of this number, which includes that bangin’ riff and solo, is just pure speed metal heaven.  “March of the Caroleans” brings forth the band’s interesting take on Swedish history through their lyrics of the Caroleans, who were the soldiers of King Charles XI and King Charles XII.  Overlapped with the fist-pounding main riff and chorus, this track is a sure fan-favourite and is probably one of the best in Lethal Steel’s repertoire.

The sheer energy and talent that this Swedish band brews is exactly what we need today in the metal community.  I urge everyone to support these guys and I’m definitely looking forward for more in the near future.  Hail true metal and hail Lethal Steel!
Rating: 88%
To contact or purchase the demo (I believe it’s still available, only on cassette though): c.lethalsteel@hotmail.com