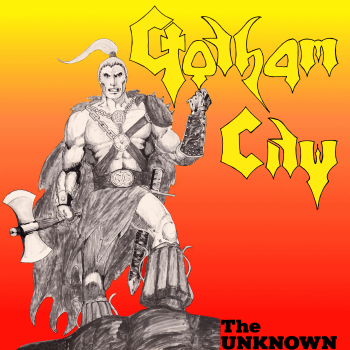 Review
Sweden has been a large contributor to the underground heavy metal scene during the 80s, providing fans with some of the most amazing heavy metal ever heard.  Hailing from the very important city of Umea, where many bands would soon emerge, Gotham City has easily become my most cherished band of the Swedish underground heavy metal scene.  Reigning along with Heavy Load as one of the most creative, unique and versatile bands in this scene, Gotham City‘s “The Unknown“ gives us a mouthful of pure melodic steel. In short, this record is comprised of complex and harmonious riffs that will get you headbanging in no time, all while the enchanting vocals will compel you to raise that fist and chant along.  I mean we’re talking about Anders Zackrisson here, the man who will later be featured on Nocturnal Rites’ first three releases! (which you guys have got to check out as well).  Songs about wars, leaders and even spaceships (these dudes must’ve been high as hell) couldn’t help but mesmerise me along with their excessive use of symbolism throughout their lyrics.   Every song sets its own mood that is propelled by the band’s melancholic yet melodic style of playing.  It is certainly not surprising if you start getting goosebumps after listening to some of my personal favorites: “See How It Flies” and “Borderline”.  These two tracks alone have greatly impacted my life…it’s almost impossible to find any song that is as compelling as these two.

Gotham City‘s short term within the heavy metal world sadly ended in 1987, and no information has been posted whether they would reunite ever again; but holy hell did their legacy ever live on.  Fortunately, a lot more people are beginning to discover many of these amazing bands, thanks to the widespread metal community that share these records.  “The Unknown” is simply another gem unearthed from the dust of the heavy metal world, and should never be overlooked!
Be sure to check out some of Gotham City’s other releases: Black Writs | Gotham City